7Horse Bursts from the Gate with Superfecta

I was waiting with bated breath for the release of 7Horse's new album Superfecta – I had seen the band do about half the songs on the album at a couple live shows over the last 6 months and I knew it was going to be good.

7Horse has its genesis in the rhythm section of 90's alt-rock band dada, but their music is about as different from dada's music as the Rolling Stones are from The Beatles.  7Horse represents the seamy side of the songwriting team of Phil Leavitt (drums, vocals) and Joie Calio (guitars, vocals).  Although 7Horse originally toured as a duo, they have recently added a bass player to their live shows, which has greatly enabled Joie to expand his musical horizons in a live setting.

Superfecta is 7Horse's fourth studio release following their debut “Let the 7Horse Run” (which contained their hit song “Meth Lab Zoso Sticker” and was played in the movie “The Wolf of Wall Street” while Leonardo DiCaprio was having sex with a woman on a pile of cash), and their second and third albums “Songs from a Voodoo Wedding” and “Livin' in a Bitch of a World”, respectively.  Although they have delved deeper into their chosen genre of countrified-rockandroll-dirtyblues and added some keyboards and organ they are still staying true to their original musical vision that their debut album put forth.

As Wikipedia says, “The superfecta is a type of wager in USA and Canada parimutuel betting in which the bettor, in order to win, must pick the first four finishers of a race in the correct sequence.”  One hopes that with four excellent studio releases and their raging live show they will indeed hit the superfecta in the music industry game.

The album starts out strong with “VictorioUS”, an obvious attempt to produce an anthem suitable for use as a crowd participation song in sporting events.  I hope it catches on because it is probably the best anthem for such use since Queen put out “We Will Rock You” and “We are the Champions” way back in 1977.

“Like a Star” and “Shining Light” burst out of the gate as straightforward rockers that are a little reminiscent of Rockpile or the Smithereens.  A little bit of color is added to the songs with the use of some added piano played by multi-instrumentalist Brian Whelan.

After that we descend into surfing across an ocean of lava with “All My Friends (Hate Me in the End)”.  I've seen them do that song live and they really tear it up.  It's definitely the grittier side of surfing music.

The next song is their obligatory ballad “Broken String”.  I think this song lets Joie deal with some of his artist's angst plus it is somewhat of a nod to all the dada fans who have been deprived of the clean guitar rock that dada were so proficient at creating.

“What is America” is a non-partisan commentary on the hate-driven political dialog that is dominating our society, and reflecting on how it is destroying our country.  This song is supplemented by a really cool guitar riff and one of Joie's cooler guitar solos.  And it RAWKS!

The next song is “Kicked in the Door”, a mid-tempo rocker that, along with some tasty color added by a Fender Rhodes-type piano sound, is slightly reminiscent of the old Guess Who song “New Mother Nature”.

“Something You're Not” then hits the ground running with a fun sounding riff and lyrics that give harsh criticism to all of the fake people out there.

The next song brings us to 7Horse's take on Spaghetti Western music.  “What Kind of Man” brings an Ennio Morricone flavor that sounds like it would feel right at home in a Tarantino film.  Best I can figure, this song is a metaphor for the train wreck that your life becomes when you betray someone who you love for money.  This is one of my favorites on the album.

After that, the uptempo rock of “Die Behind The Wheel” explodes – this is currently my favorite song on the album.  It kind of highlights how important it is to give everything you got to life because it can end unexpectedly way sooner than you would wish.

The last song on the album is another one of my favorites --  “Burn” – it has a Crazy Horse feel – 7Horse really embraced the mope in this one.  I think it is making comparisons of the loss of everything you have to the losses people are feeling in the onslaught of the California wildfires.

The whole album clocks in at about 38 minutes, which is long enough that you feel like you have rocked but short enough that you still want more when the album finishes.  7Horse is doing shows in various parts of the country – definitely try to see them– they really tear it up live – it is a welcome change in the live setting that front man Phil's drums are positioned at the front of the stage, and everyone gets to see and hear a goodly portion of tone-meister Joie's collection of vintage guitars.

Paul is a chemical engineer by day and weekend guitar warrior by night.  Check out his band Jehovah's Witness Protection Program (jwpp-band.com) or some of the other drivel he posts on his web page at www.paullemieux.com. 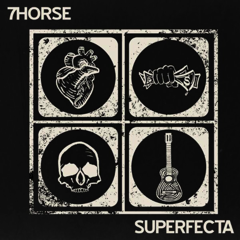 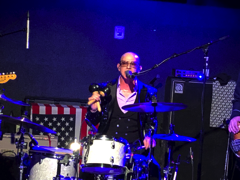 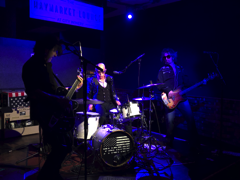 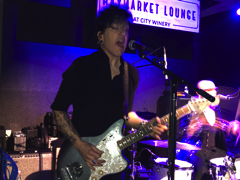